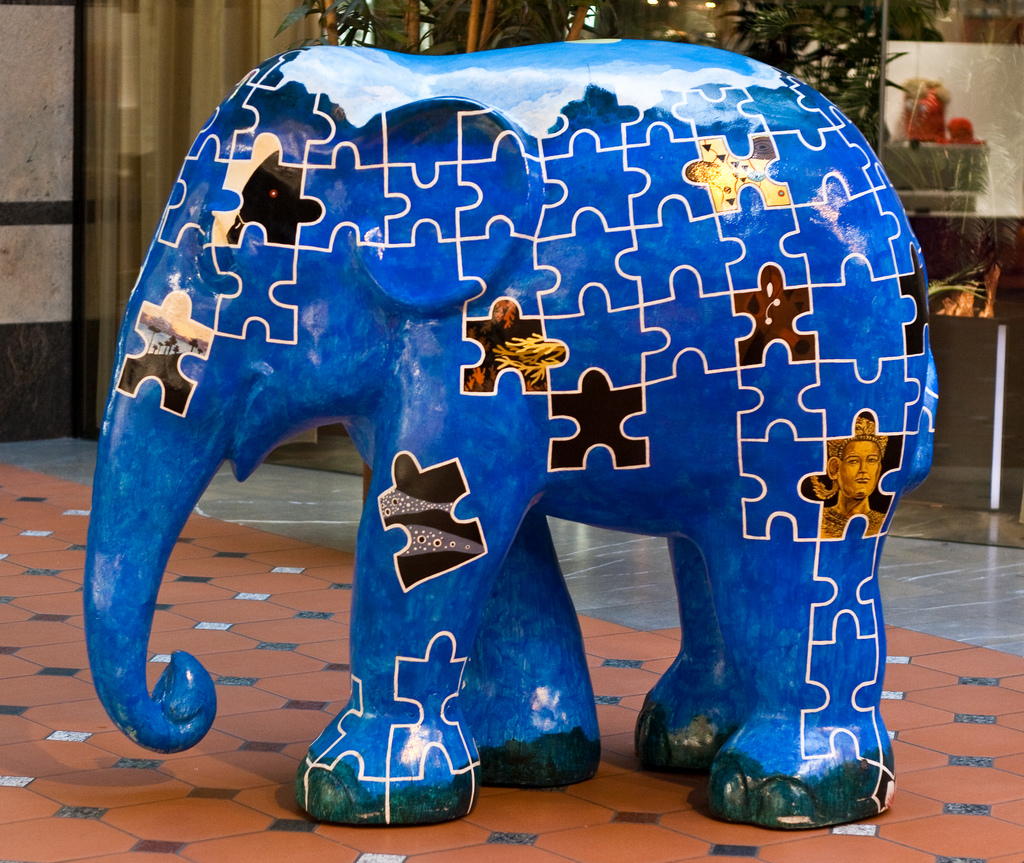 Have you ever noticed that, while looking closely at the principles, explanations, or points being offered by bonafide truth seekers, when their particular choice of words is overlooked, they appear to be representing the same general things? They may pick a different facet, point within the process, or method of representing concepts; but most can be reduced down to the same common denominators. I find this in spirituality, science, and healing. The field may determine the focus and terminology being used, but that which is presented is the same truth. When several blind people, from different countries and cultures, explore and describe different parts of an elephant, it may sound like they are experiencing completely different things. Although their accounts may vary widely, they are all describing the truth of what they felt. They may say it felt like a tree trunk, a smooth bone, a wall, a giant leaf, a snake, or a hose; or something else; and they may describe the texture, odors, etc. in different ways. They may convey their experiences in different languages, levels of intelligence, and cognitive styles; but they are describing the same truth. They are all describing the truth of what the elephant was for them. They may each believe and maintain that what they experienced is what an elephant is, and discredit the accounts of others if they differ. For each of them, the rest of the story (what they did not perceive) was the elephant in the room.

Expanding Our Awareness of Truth

We may be relatively blind to the truth of the universe. We may not have “seen” it yet, or we may have glimpsed only a small part of a larger whole. Our mind, particularly its ego and cognitive distortions, may convince us that we see and know it well. When we open our mind and heart to the discovery of truth, whatever this may be, we can begin assembling, like a cosmic puzzle, the various pieces of the whole. Like the elephant explorers above, if we combine all of their experiences, we will have a better understanding of what an elephant really is. If each of them gets stuck on being right, or defending their experience as the only truth about an elephant; then the broader truth will be lost to the human ego, and they will live in a relative state of illusion. I believe this same principle applies to the various areas of science, spirituality, and healing (and most other things in the material world). And, speaking of relatives, let’s check in on Aunt Suzy.

As discussed in my recent post on orthomolecular psychiatry, Aunt Suzy’s schizophrenia can be seen in a variety of ways from within the universal gallery of possibilities. Let’s combine the shamanic, orthomolecular, and Ayurvedic approaches considered thus far. Let’s pick them up and place them on the cosmic puzzle board. So the shaman sees our aunty’s schizophrenia as a healer trying to be born, through conflicting energies trapped within the same energy field. An orthomolecular scientist might say that there is too much or not enough of certain naturally occurring substances in the body (e.g. niacin, vitamin C, or folic acid). Our Ayurvedic practitioner could maintain that Aunt Suzy’s symptoms are being caused by a weakened pranic shield, which is allowing the global pain and suffering usually confined to the astral body to flood her consciousness with fear, alter her perception of reality, and lead to a loss of control. When Aunt Suzy accepts the truth of whatever is occurring in her life, surrendering her ego and its defenses to this acceptance; she will be ready to embrace her own healing, growth, and divine purpose.

She is at least a healer of herself waiting to be born. By accepting her circumstances, seeking guidance, and taking action; she will resolve the conflicting energies into one. If she chooses to share her experience and knowledge with those around her, she may also become a healer of others. By insuring the proper concentrations of naturally occurring bodily substances, she will be eliminating the physical component to her illness. When doing so, the body will no longer create or maintain the illness. The mind will be free to let go and consider something different (e.g. hope, purpose, healing). The brain will shift her out of Survival Mode, allowing her to once again experience the full range of thought, possibilities, and courses of action (instead of only those related to survival). When she realizes that the terror and paranoia are not part of who she is, but rather the darkness and pain of the world leaking through her weakened pranic shield; she will be free to, as the awakening healer, restore health and strength to her shield. So the shamanic view brings purpose and meaning to her experience, the orthomolecular brings balance and relaxation to her body, and the Ayurvedic further explains what is happening and offers natural solutions. When considered openly, seemingly different approaches are not at odds with each other. They are pieces of the same puzzle. When we remove the ego attachment to particular modalities, we are better able to heal ourselves, while helping others heal and grow.

Following are brief descriptions of some alternative approaches to health and happiness, along with links to help you locate preferred providers.

Naturopathy or naturopathic medicine is a form of alternative medicine employing a wide array of “natural” treatments, including homeopathy, herbalism, and acupuncture, as well as diet and lifestyle counseling.
Find a Naturopathic Doctor

Functional medicine is a personalized, systems-oriented model that empowers patients and practitioners to achieve the highest expression of health by working in collaboration to address the underlying causes of disease.
Find a Functional Medicine Practitioner

Homeopathy, or homeopathic medicine, is a holistic system of treatment that originated in the late eighteenth century. The name homeopathy is derived from two Greek words that mean “like disease.” The system is based on the idea that substances that produce symptoms of sickness in healthy people will have a curative effect when given in very dilute quantities to sick people who exhibit those same symptoms. Homeopathic remedies are believed to stimulate the body’s own healing processes. Homeopaths use the term “allopathy,” or “different than disease,” to describe the use of drugs used in conventional medicine to oppose or counteract the symptom being treated.
Find a Homeopath

TCM, or Traditional Chinese Medicine, is a profound pathway to create the life you truly want to live, the life you were born to live. It’s a timeless bridge that can initiate and support change and growth in any and every life dimension: physical, mental, emotional, and spiritual.
Find a TCM Practitioner

Acupuncture is a form of Traditional Chinese Medicine (TCM) that uses fine needles and inserts them into specific points in the body to treat numerous body ailments including pain.
Find an Acupuncturist

Orthomolecular medicine describes the practice of preventing and treating disease by providing the body with optimal amounts of substances which are natural to the body.
Find an Orthomolecular Medicine Practitioner

Ayurveda is a 5,000-year-old system of natural healing that has its origins in the Vedic culture of India. Although suppressed during years of foreign occupation, Ayurveda has been enjoying a major resurgence in both its native land and throughout the world.
Find an Ayurvedic Doctor

Maybe those things you did, while you were in that END_OF_DOCUMENT_TOKEN_TO_BE_REPLACED