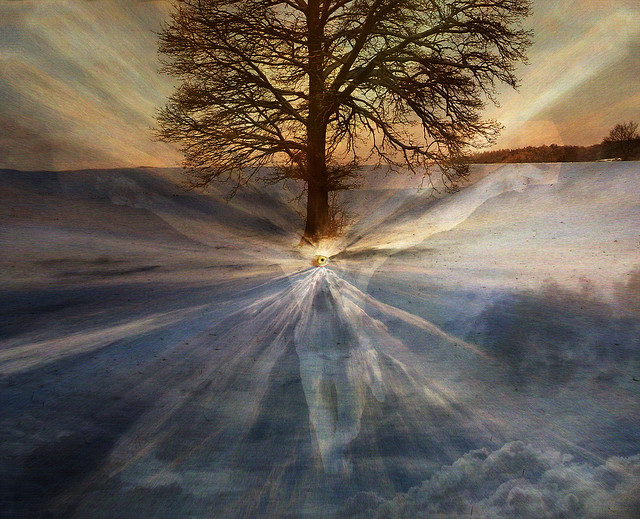 So I decided to take a break from my depression article (it was turning my rainbow light blue 🙂 ) in order to share something that, for me, has been a sweet and beautiful blessing in disguise. Gradually, between the ages of 14 and 22, I lost my external vision, through the sporadic mutation of retinitis pigmentosa, to the increasingly glarry and black world of the unsighted. I was blinded by both the light and the darkness. The brights were brighter and the dims dimmer. Above a certain threshold of light, it was like looking through the glare of a dirty windshield at sunset; and below this point, like that murky place where shadows become the night. While struggling through the acceptance of it all; acceptance of self, acceptance of others, acceptance of blindness, acceptance of life; I discovered a higher truth and brighter light. I began seeing through the eyes of my heart, not my head. I had stumbled up the stairway of transition, through the doorway of awakened consciousness, into a place where truth is god and light is love.

I quickly began realizing that most could not relate, and that this might be one of those things that must be experienced to be believed. Many seemed interested, most appeared doubtful, a few became bewildered by the view; some attacked fiercely, others called it crazy, and the least reached out their hearts as if they knew. This helped me understand vibrational frequencies, levels of awareness, and dimensions of truth.  Most people can only believe that which exists at the level of vibration, awareness, and truth they are able to access. Although many claim to have faith, most require evidence or substance to believe. What they believe is not a requirement of what I believe.

Maybe those things you did, while you were in that END_OF_DOCUMENT_TOKEN_TO_BE_REPLACED